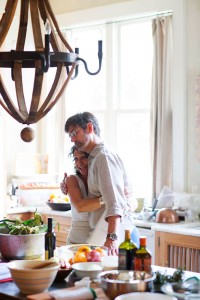 With 10 people in the kitchen and a four-item menu including red snapper jowl and white peach semifreddo, most chefs in the Southern Chefs Series are focused on making sure everything goes smoothly. But chef Chris Hastings, chef/owner of the Hot and Hot Fish Club in Birmingham, Alabama, spent his time with us last month making sure it didn’t.

Right in the middle of a recipe, Chris would stop and switch the process. He saw that teams were doing their own thing and not watching what the others were cooking, so he had them sit down with a cocktail and talk to each other. He showed everyone that cooking isn’t always about getting from start to finish—it’s about conversation, different perspectives and the beauty of spontaneity.

His Hot and Hot Tomato Salad is his signature dish for a reason. Layered with fresh corn, field peas, fried okra and smoked bacon, it’s simple and subtle but tastes like restaurant-quality food. It’s also easy to assemble on the plate, but would also make a great buffet dish.

Before Chris eats, he always says a prayer. When I asked him why, he said, “Marie, I’m always mindful of being thankful.”

I’m thankful he was here last month to share his time and recipes with us.

Toss tomatoes with ¾ cup of balsamic vinaigrette. Sprinkle with 1½ teaspoons salt and ¾ teaspoon pepper and marinate at room temperature until ready to serve.

Combine the ham hock, onion, thyme, and field peas in a medium stockpot with enough cold water to cover. Bring peas to a simmer and cook until just tender, about 12 to 15 minutes, stirring occasionally. Remove from heat, drain, and cool. Discard ham hock, onion quarters, and thyme sprig. Place cooled peas in a mixing bowl and set aside.

Shave the kernels off the corncobs. Heat the peanut oil in a large skillet over medium-high heat. Add the corn and cook until tender, about 8 to 10 minutes. Season kernels with salt and pepper to taste, then remove pan from heat and let cool slightly. Toss the corn kernels with the cooked field peas and the remaining 3 tablespoons of vinaigrette; set aside.

To fry the okra,pour vegetable oil into a deep-sided skillet to a depth of 3 inches and heat to 350˚F. Place okra pods in a small bowl with the buttermilk. Toss until well coated. Combine the corn flour, cornmeal, all-purpose flour, salt, and pepper in a medium-size bowl. Drain the okra and toss in the cornmeal mixture. Shake off any excess coating, and fry in hot oil for 2 to 3 minutes, or until golden. Drain pods on a paper towel-lined plate, and season with salt and pepper if needed.

To assemble the salad, arrange tomato slices on 6 plates and surround with whole cherry tomatoes. Top with even spoonfuls of pea and corn mixture. Arrange 5 pieces of fried okra around each plate, and place a slice of crispy bacon on top of each salad. Finish each stack with a drizzle of 1 to 2 tablespoons of chive dressing; garnish with 1 tablespoon of basil chiffonade per plate. Serve immediately.

Whisk together all of the ingredients in a large bowl. Use immediately or store in an airtight container in the refrigerator for up to 5 days. Be sure to bring the chilled vinaigrette to room temperature and whisk well before serving.

Combine the garlic and chives in small bowl. Add egg yolk, lemon juice, salt, and pepper, and whisk to combine. Add the olive oil in a thin, steady stream while vigorously whisking. Next, whisk in the crème fraîche. (You may need to add a drop or two of water if dressing is too thick.) Cover and chill the dressing for at least 20 minutes before serving. Keep refrigerated in an airtight container for up to 2 days.

When people ask me what I do, I tell them I’m the co-founder of the Serenbe community and the Inn at Serenbe. But, the truest END_OF_DOCUMENT_TOKEN_TO_BE_REPLACED