We traded city life for the country years ago and I’ve never regretted it for a second. But one of the things I’ve always missed is having a bookstore nearby.

Back when we lived in Atlanta, Steve and I had a Friday night ritual. We’d eat at Surin Thai, then head to the bookstore. For many years it was called the Oxford Bookshop, then it became Chapter 11. When we created Serenbe, we dreamed of having a bookstore in the community.

This is one time when reality is even better than the dream. 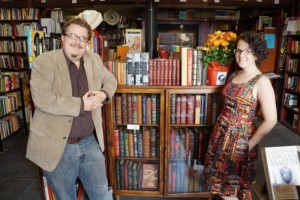 We heard about Josh Niesse and Megan Bell from AIR Serenbe’s executive director Brandon Hinman, who’d somehow gotten wind of our bookstore dream. They own Underground Books in Carrollton, about 35 minutes away near the University of West Georgia. It’s mostly used and rare books, with a huge online business.

At the time, the Textile Lofts were being built with three spaces on the ground level. One seemed perfect for a bookstore. Brandon connected Josh and Megan with Garnie and what began as a conversation is now Hills & Hamlets Bookshop.

This little jewel of a space — named for the Chattahoochee Hills and Serenbe’s hamlets — was designed by Peter Clemens, a Serenbe resident and retired set designer. Peter fell in love with Josh and Megan and their bookstore in Carrollton. He knew they were on a budget and stepped forward to help with design. He even built all the cabinetry.

It’s charming: They have a little tea station and chairs, plus

rare books in the back against the wall. They have great speakers and several book clubs going. I could go on and on, but Josh’s vision is as beautiful as the shop itself. Here’s what he says:

“The best bookstores today (and ever, really) are about the experience of a bookstore. The magic, the serendipity, the sense of discovery, the creation of community and connection with other readers, book lovers, dreamers and thinkers.

This stands in sharp contrast to the frictionless, one-click online book buying, or sterile big-box retail, that has come to dominate the American bookselling landscape.

What Serenbe is to suburban sprawl a good indie bookstore is to Barnes & Noble or Amazon. Serenbe is the perfect place to find people who appreciate conscious cultivation of community and creative placemaking. From our first visit to Serenbe, we were on fire with a vision for a bookstore in this one-of-a-kind place and our conversations with residents just added fuel to that fire until Hills & Hamlets Bookshop took on a life of its own. “

When people ask me what I do, I tell them I’m the co-founder of the Serenbe community and the Inn at Serenbe. But, the truest END_OF_DOCUMENT_TOKEN_TO_BE_REPLACED