Get Canned: Linton Hopkins Fires Up His Best Bolognese 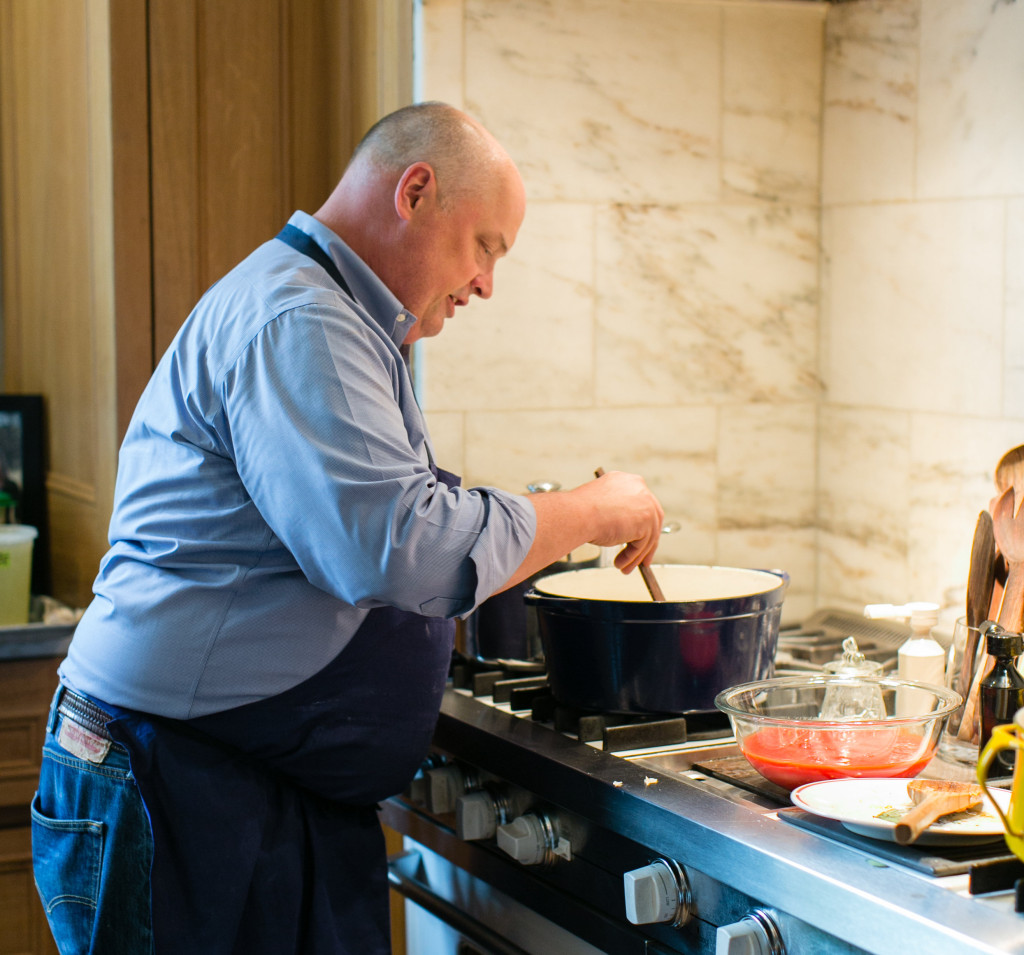 In all my years of cooking, it never occurred to me that there was a difference between pomodoro sauce and marinara. Then Linton Hopkins appeared for the Southern Chefs Series with his canned tomatoes and chittara cutter and taught me a thing or two.

Pomodoro is made with fresh tomatoes. Marinara is made from canned. And not just any canned, but D.O.P. certified, or Denominazione d’Origine Protetta, which means they’re strictly regulated according to things like the strain of San Marzano tomato, how they’re grown, where in Italy they’re grown and how they’re harvested (by hand, of course).

Full of knowledge from his trip to Italy last summer, Linton made both a Bolognese and a marinara. He did the Bolognese first because — and he was very adamant about this — a true Bolognese has to cook for three hours.

He was also adamant about the size of the onion, celery and carrot we chopped to sauté in olive oil and butter before adding the ground beef. They had to be tiny so they could “melt into the sauce.”

Fun fact: At Restaurant Eugene, Linton only allows chefs to have two knives at their station: a 10-inch and a paring knife. If they can’t do it with those two, he says they don’t need to be in his kitchen.

I had one Dutch oven in the house, so Linton said, “Go find a romantic pot, Marie.” I was like, what? But I went to a neighbor’s house, asked for a romantic pot and came back with a lovely enamel pot. Crazy to think it makes the sauce taste better, but it just might.

Though we made it on Sunday, we ate the Bolognese on Monday with gnocchi. Linton used Marcella Hazan’s recipe — a truly authentic Bolognese with no flash or pizzazz.

And it makes a damn good sauce.

1. In an earthenware pot or deep, heavy, enameled cast-iron casserole, add the chopped onion with all the oil and butter and sauté briefly over medium heat until just translucent. Add the celery and carrot and cook gently for 2 minutes.

2. Add the ground beef, crumbling it in the pot with a fork. Add 1 teaspoon salt, stir and cook only until the meat has lost its raw, red color. Add the wine, turn the heat up to medium high and cook, stirring occasionally, until all the wine has evaporated.

3. Turn the heat down to medium, add the milk and nutmeg, and cook until the milk has evaporated. Stir frequently.

4. When the milk has evaporated, add the tomatoes and stir thoroughly. When the tomatoes have started to bubble, turn the heat down until the sauce cooks at the laziest simmer, just an occasional bubble. Cook, uncovered, for a minimum of 3 ½ to 4 hours, stirring occasionally. Taste and correct for salt. If you cannot watch the sauce for such a long stretch, you can turn off the heat and resume cooking it later on. But do finish cooking it in one day.

This sauce can be kept in the refrigerator for up to 5 days, or frozen. Reheat until it simmers for about 15 minutes before using.

When people ask me what I do, I tell them I’m the co-founder of the Serenbe community and the Inn at Serenbe. But, the truest END_OF_DOCUMENT_TOKEN_TO_BE_REPLACED