In last week’s post, I wrote about the rye toasts that chef Gerry Klaskala made during his visit to the Southern Chef Series. Today I’m back with more Gerry and — that’s right — more bread.

Months before his visit, Gerry told me he wanted to do an Alsatian theme to expose participants to recipes from the French region so heavily influenced by nearby Germany. And did he ever. Gerry brought three types of sausages, three kinds of pork, ham, roasted duck, boiled potatoes, different mustards and a big loaf of potato bread to make bread dumplings. 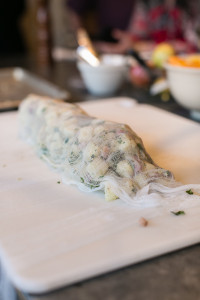 First he started by cooking the applewood-smoked bacon in a pan. You know, because we needed more pork. Then he added onions and added that mixture, plus nutmeg, parsley, salt and pepper, to the potato bread that had been cubed and toasted. After moistening it with chicken stock, he formed it into the shape of a sausage, wrapped it in cheesecloth, tied off the ends with cotton twine and poached it in a pot of boiling chicken stock. Then he sliced it up into discs and served it with the pork and its juices. It was amazing. Might have something to do with the fact that he cooked the bacon in fat rendered from the goose he cooked at Christmas.

There was nothing green about this dinner. The only vegetable was the cabbage he’d put up three months ago and brought with him. And we couldn’t get enough.

Gerry is easygoing and such a natural with the guests. He entertains at home a lot, which means he cooks all week at work, goes home and has dinner parties on Sundays. He does it because it loves it and it shows.

Join us at the next Southern Chefs Series with guest chef Ford Fry of JCT. Kitchen, No. 246, The Optimist, King + Duke and more. The experience includes preparing and eating dinner on Sunday and lunch on Monday with the chef, breakfast and an overnight stay at the Inn at Serenbe. $695; 770.463.2610

1. Heat a heavy-bottomed sauce pan, add oil and cook bacon until half cooked

2. Add onions and continue to cook until onions are soft. Remove from heat and set aside to cool.

4. Lay out a sheet of 20″ x 24″ cheesecloth. At one end, shape the dumpling mix into a large sausage shape. Tightly roll up and tie off each end with cotton twine.

5. Place chicken stock in a pot large enough to hold dumpling. Bring to a simmer and cook for 35 minutes. Shut off heat, cover and hold.

6. When ready to serve, remove from stock, cut strings and unroll. Cut into ¾-inch round discs.

Note: These particular bread dumplings are intended to be served with roasted meats and sauce or pan gravy. They are great for sopping up all that deliciousness.

« Bread Winner: The Rye Toast That Took Me Back 45 Years
Bread Dumplings »

When people ask me what I do, I tell them I’m the co-founder of the Serenbe community and the Inn at Serenbe. But, the truest END_OF_DOCUMENT_TOKEN_TO_BE_REPLACED