John Currence And The Best. Dessert. Ever. 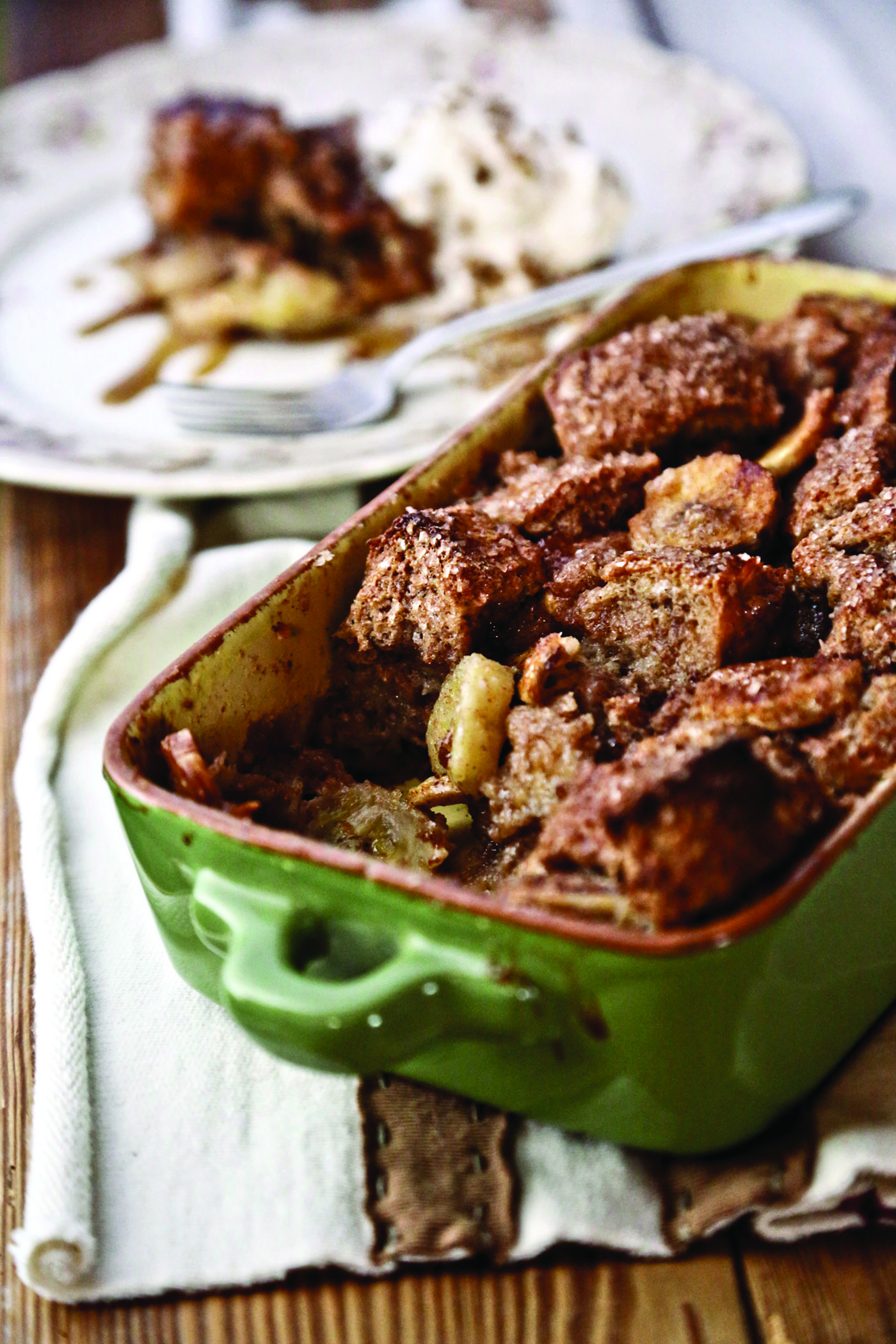 Chef John Currence showed up for his appearance at the Southern Chefs Series in a baseball hat and sport coat. And when it was time to cook, he just walked over to the stove. Didn’t even want an apron.

I’d never met the “big bad chef” from Oxford, Mississippi, but I got to know him quickly through his stories. I loved the ones about his childhood in Louisiana and especially his mother. She was a schoolteacher, but she made dinner for the family from scratch every night. That meant a lot to him as a child, but even more to him now that he’s an adult.

John became a first-time father at 48 years old and also gave birth to a fascinating cookbook called Pickles, Pigs & Whiskey: Recipes from my Three Favorite Food Groups And Then Some. It includes a recipe for bananas foster bread pudding with brown sugar-rum sauce and candied pecan “soil,” and in the four years I’ve been hosting the Southern Chefs Series, it is The Best Dessert we’ve ever had. It was so phenomenal I did a cooking class a few days later with a group of executives and made them bake it so I could have some.

In his new cookbook, John’s introduction to the recipe includes childhood brunch memories in his sarcastic Southern style:

Sunday brunch after church when I was a youngster was a huge deal. Mom and Dad cooked all the time, and eating out was definitely not routine for us. Brunch, after the fanfare that church was, always seemed like a circus to me. There were dining rooms full of guéridon at Commander’s Palace, Brennan’s and Antoine’s preparing café brulot, cherries jubilee, baked Alaska, crepes Suzette, and our favorite, bananas Foster. This was a deft creation of flambéed bananas with loads of rum, brown sugar, butter and a dollop of vanilla ice cream. It was magic.

Turning this into a bread pudding, when we first opened the Grocery, took about as much creativity as, I’m sure, coming up with the McRib did. But it is still a serious crowd-pleaser 20 years later.

Before John left, he said, “Now Marie, what do I have to do to get back here?” John’s welcome anytime, but I’d be especially happy to see him again if he came bearing a big pan of bananas foster bread pudding.

Preheat the oven to 350 degrees F. In a large bowl, whisk together the eggs until well blended. Whisk in the cream, milk, vanilla and melted butter and combine well.

In another large bowl, blend together 2 cups of the sugar, the salt, 2 tablespoons of the cinnamon and the nutmeg. Stir in the egg mixture and blend well. Stir in the banana liqueur. Add the bread, combine well and let rest for 10 minutes. Mash the bread pudding mixture with your hands to make sure all the bread is soaked through. Stir in the bananas.

Butter a deep 10-inch square baking pan. In a small bowl, blend the remaining ¼ cup sugar and 2 teaspoons cinnamon. Pour the bread pudding mixture into the prepared pan and sprinkle the top with the cinnamon sugar. Cover with aluminum foil and bake for 45 minutes. Remove the foil and bake for an additional 10 minutes. Grab the edge of the pan with a dry towel and give it a shake. Look to the center of the pan; if it doesn’t jiggle and looks firm, it is cooked through.

To make the pecan “soil”: Preheat the oven to 375 degrees F. In a stainless steel bowl, mix the pecans with the butter and then spread them into a single later on a baking sheet. Bake, stirring every 4 minutes, for about 12 minutes, or until you can begin to smell them cooking. They will give off a distinct “toasted-nut” smell. Remove from the oven and let cool.

In another bowl, blend both sugars, the salt, cayenne, paprika, cinnamon and cloves.

Beat the egg white with 1 tablespoon water until frothy in a large bowl. Stir in the pecans to coat evenly. Transfer the pecans to another bowl and toss with the sugar mixture until evenly coated. Spread the sugared pecans into a single layer on a baking sheet coated with nonstick spray. Bake for 30 minutes, stirring occasionally. Remove from the oven and let cool, separating the nuts as they cool. When completely cool, place the nuts in a food processor and pulse until broken into a “soil” consistency. Set aside until ready to serve.

White the bread pudding is baking, make the sauce: In a small saucepan over medium heat, warm the melted butter to a simmer. Stir in the brown sugar and vanilla, combine well and simmer for 10 minutes.

Stir in the rum and simmer for an additional 3 minutes. Swirl in the cream and the split vanilla bean and simmer for 5 minutes. Remove the vanilla bean and, with a small sharp knife, scrape the seeds from inside the pod and blend them into the sauce. Discard the empty pod or rinse and add it to a bottle of bourbon to make your own extract. Simmer 5 to 6 minutes more, stirring constantly, or until sauce thickens.

To serve, scoop a large, warm spoonful of bread pudding into a bowl, drizzle with the sauce and sprinkle with the pecan “soil.”

A great way to chop an onion

During one of my cooking demo’s I learned that people like to learn basic tips, like how to finely chop an onion. To me, one of the best ways to learn is to watch!

An afternoon in Marie’s kitchen

I am excited to be a guest blogger today to tell everyone about spending a day in Marie’s kitchen.
The other day I was a part of a really fun filled afternoon. A group of co-workers from Georgia EMC had called the Inn at Serenbe and wanted to plan a team building day in Serenbe.
Their day began with visiting Serenbe farms with farmer Paige Witherington. They participated in picking vegetables and learning about organic farming.

After spending an hour on the farm, off to Marie’s house for a fantastic cooking demo, family stories and of course a great meal in the end.
When the six co-workers first arrived, Marie began the day with a wonderful display on her kitchen island featuring different stations set up with ingredients for each course. The menu was Serenbe farms tomato salad, chicken stuffed with goat cheese, fried okra fritters and one of my personal favorite desserts, blueberry cobbler!
Along with great cooking tips from Marie, each guest participated in creating the meal. They learned the proper way to slice tomatoes for the salad, chop onions, fry okra, etc. Several of the guests said that they did not cook much yet were eager to learn some simple cooking techniques.
Between the stories, tips and the inevitable way Marie makes everyone feel so welcome, within just a few minutes everyone jumped right in and the prepping began.
Soon the okra was being fried, the chicken was stuffed, the cobbler was in the oven and the dressing was being whisked!

Before we knew it the meal was complete and I think everyone was really proud to say that they had participated and learned something about being a better cook.
The fun really began at the dining table when Marie shared stories from Mary Mac’s, the history of Serenbe and her passion for cooking. With both the wonderful company and the amazing meal, our guests from Georgia EMC had a great time. Between their satisfied appetites and the sparkle in their eyes, you could see they were very pleased with the choice of Serenbe for their team building day.
Now they were off to a tour of the Serenbe community with Steve Nygren to finish out their day.
I had the pleasure of seeing Marie doing what she loves and what she does best. Cooking for others, sharing her passion not only through her food but also sharing her family stories with others in her personal kitchen.
Check back shortly as Marie plans to post the recipes from the day so she can share with her readers!
As her friend and guest blogger, I must admit it was an amazing day. I would recommend this for everyone looking for a wonderful way to experience Serenbe. If you are interested in a day with Marie, please contact the Serenbe Inn.
Click here for a testimonial on the wonderful day!
~Dana Widmer

“Cooking is about sharing your love”

A beautiful Thursday afternoon sitting in Marie’s kitchen, it only takes me a few minutes to realize her passion for food, cooking and life at Serenbe. Marie’s definition of food is one that that says it creates a wonderful community gathering place.
“In your house, everyone always gathers around the kitchen. Food is not just about traditional nutrition but rather about feeding your soul”.

For Marie, cooking is about caring for people and showing your love to them.
To truly experience the essence of Marie as I did sitting with her, click on the play button below to hear her passion and what she wishes to bring to our blog readers!

For me, the two words are integrally intertwined. I feel style is an outward expression of the inner aspects of ourselves, our soul.
From our manner of dress, the way we design our homes, to the food we prepare, each of these gives us ways to express ourselves.

I have always felt that personal style should not depend on the latest craze or fad.

It is about realizing what feels authentic to you and embracing that with passion.

Nathalie Dupree is coming to Serenbe 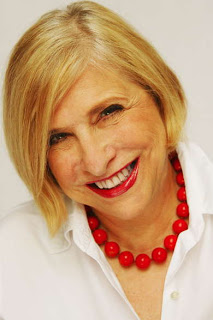 Update: The cooking event with Nathalie has SOLD out. If you would like to be put on a waiting list in case of any cancellations, please contact the Inn, 770.463.2610.

For 27 years I have had the pleasure of being friends with Nathalie Dupree.

I am excited to tell you that she will be joining us for the launch of the Southern Chef Series at Serenbe on October 11-12.

Nathalie Dupree is the author of ten cookbooks, eight of which are hard backs, selling over half a million copies, and host of three hundred television shows, which have aired on PBS, The Learning Channel and The Food Network for over fifteen years.

Nathalie, as she is known to her fans, has won innumerable awards for her work, including two James Beard Awards. She is most famous for her approachability and understanding of Southern cooking, having started the New Southern Cooking movement now found in many restaurants throughout the South.

She will be teaching to a  group of 10 participants who wish to learn about “Mastering the Art of Southern Cooking.” Along with learning tips on cooking some of her favorite southern recipes you will share a couple of days hearing her personal stories of her many food adventures.
For reservation information, please call 770-463-2610  Please stay tuned to my blog for more details.

When people ask me what I do, I tell them I’m the co-founder of the Serenbe community and the Inn at Serenbe. But, the truest END_OF_DOCUMENT_TOKEN_TO_BE_REPLACED