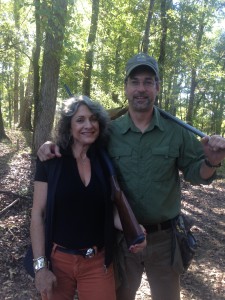 When Chris Hastings, chef/owner of Hot and Hot Fish Club in Birmingham, Alabama, did a Southern Chefs Series visit in 2012, he had just been on a dove hunt and brought fresh dove with him. That was my first experience with dove and I loved it—it’s a richer, darker taste than dark meat chicken.

Since then, I’ve been curious about dove hunting, so when the opportunity came up to shoot a  branding video at Serenbe, I asked Chris to participate. A few weeks later he was back at Serenbe, gun in hand, ready to take me on my first dove hunt.

We went to a neighbor’s farm out in the Chattahoochee Hill Country and I held the gun and shot it, but not actually at a dove. Chris shot plenty, dressed them, marinated the breasts in olive oil with fresh thyme, salt and pepper, then cooked them on the grill. He also roasted okra over an open flame in a cast-iron skillet and it was the best okra I’ve ever eaten.

I made sautéed collard greens and spoon bread from the Southern cookbook to end all Southern cookbooks: Mastering the Art of Southern Cooking by Nathalie Dupree and Cynthia Graubart. I consider Nathalie, who’s coming to do the Southern Chefs Series March 23-24, the second queen of Dixie cuisine, right after my mother, of course.

Preheat oven to 350 degrees. Butter a 7-inch round casserole or soufflé dish.

Scald the half-and-half in a heavy pan by bringing it almost to a boil, creating tiny bubbles around the outside. Pour a steady stream of cornmeal into the half-and-half, whisking constantly. Continue cooking until it forms a thick mush. Remove the heat and stir in the butter and salt. Let cool slightly.

Beat the egg yolks until pale yellow and stir them into the corn mush.

Whisk the egg whites with a stand mixer until the form stiff peaks. Gently fold the whites into the corn mush.

Pour the corn batter into the prepared dish and bake in the center of the oven for 35 minutes; at this point, feel the top and see if it’s wobbly or runny. If it is, return to the oven until cooked, up to 10 minutes or so longer.

The surface should be puffy and golden brown and resemble a soufflé. Serve hot.

When people ask me what I do, I tell them I’m the co-founder of the Serenbe community and the Inn at Serenbe. But, the truest END_OF_DOCUMENT_TOKEN_TO_BE_REPLACED