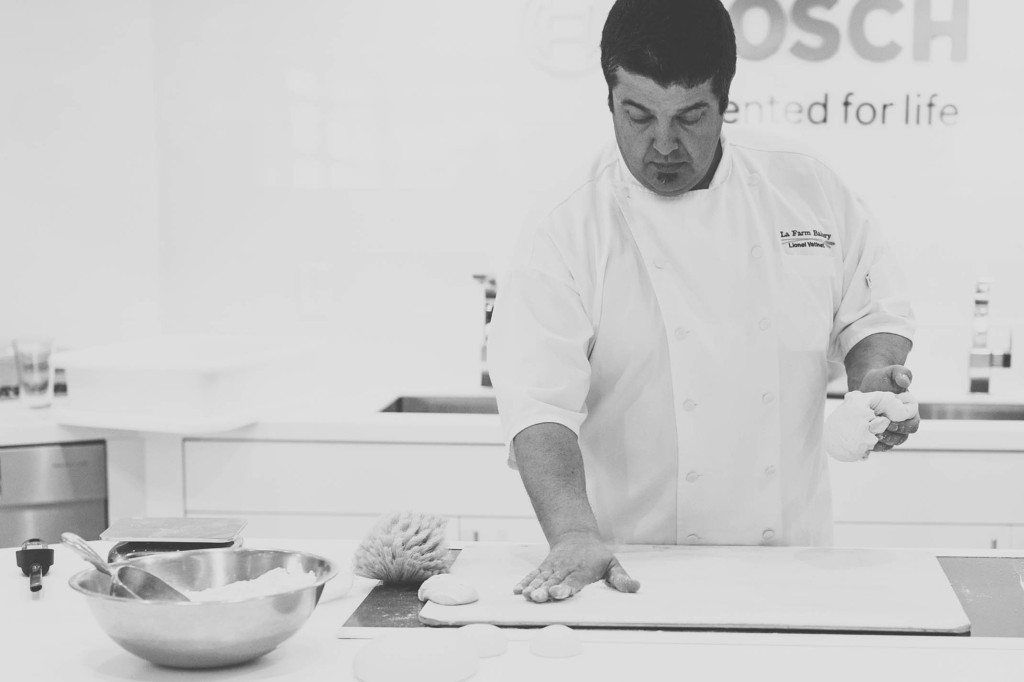 Master baker Lionel Vatinet believes in the magic of baking bread. And by the time he’d finished his recent bread demonstration at Serenbe’s Bosch Experience Center, all 70 people in attendance did as well. Or maybe their mouths were too full of fresh sourdough to say otherwise.

I’ve always been interested in the metaphysics of—and the energy behind—bread. You put flour and yeast together and it becomes something incredibly wonderful. Lionel, who was born in France and now owns La Farm Bakery in Cary, North Carolina, is very keen on the whole aspect of handling the dough lovingly and letting it know you. No gloves allowed!

Talking with Lionel brought back so many memories of baking bread with my Aunt Merle, my mother’s favorite sister. She was the head of public nursing for Dekalb County and took me to my first symphony when I was 12. I’m the fifth Merle Marie in my family and was named after her, though for some reason I was called by my middle name.

This recipe for Vatinet’s La Farm Bread comes from his new cookbook A Passion For Bread: Lessons from a Master. If you have flour, salt, water, starter, hands and an oven, you can make some magic in your own kitchen.

The temperature of the dough should be between 72°F and 80°F. The dough should be soft to the touch and moist feeling, but should not stick to fingers. Place dough in a bowl that had been lightly dusted with flour. Cover with plastic and let rise for 1 hour. Fold the dough by lifting each of the corners of dough and folding them into the center. Cover the dough with plastic and return to a warm, draft-free place for another hour. Repeat this folding process a second time, and let rest for a third hour.

Since you are making one loaf, no dividing is needed.

Shape the dough into a boule. Lightly dust a banneton with flour. Place the dough in the banneton, seam side up. Throw a light film of flour over the top to keep the plastic from sticking, and cover tightly with plastic wrap.

Let the dough proof for 2½-3 hours in a warm, draft-free place.

Place a piece of parchment paper on a bread peel. Turn the dough onto the peel, bottom side up. Using a single-edged razor blade, score the loaf, just barely breaking through the skin and cutting about ⅛ inch into the dough. Bake at 450°F for about 40 minutes until the bread is a deep golden brown with a crisp crust and sounds hollow when tapped on the bottom.

When people ask me what I do, I tell them I’m the co-founder of the Serenbe community and the Inn at Serenbe. But, the truest END_OF_DOCUMENT_TOKEN_TO_BE_REPLACED