Love on the Rocks: The Labyrinth at Serenbe 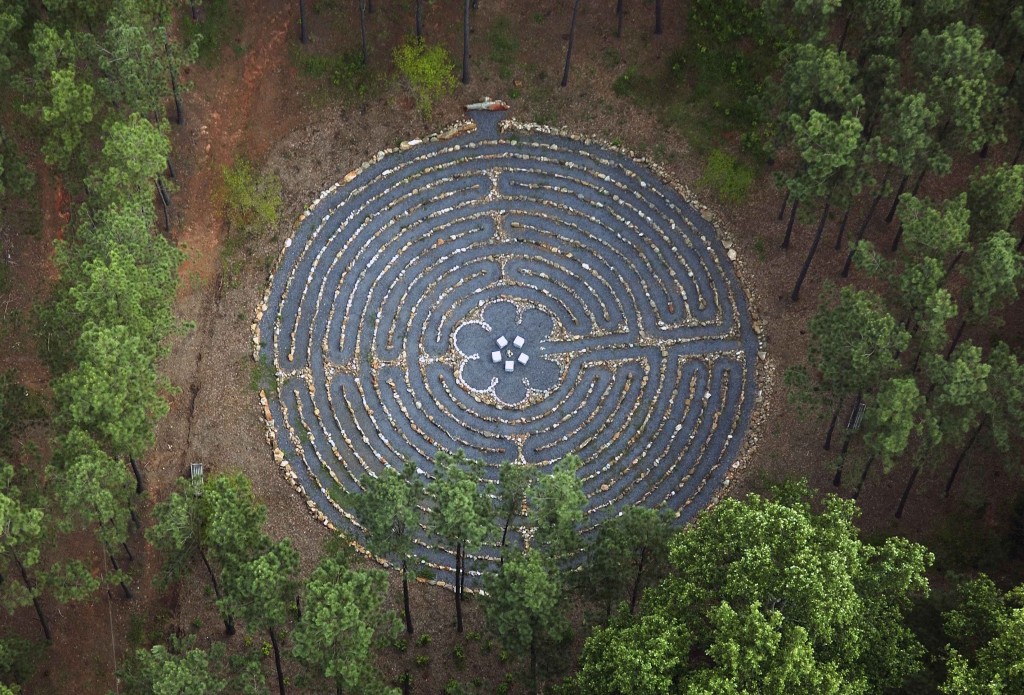 About 13 years ago, I met a woman who facilitated the building of labyrinths at a spirituality conference. As soon as I got home, I told Steve I wanted one. And of course, he knew just the place.

At the time, we were living in a seven-room bed and breakfast that is now the Inn at Serenbe. Steve cleared a patch of land nearby and I put together a letter inviting more than 40 family members and friends from all over the world to help us create the labyrinth. My only request: They had to bring a rock and a story to go with it.

When I think back about it, it seems like an unusual request. But lo and behold, everyone brought something special. I was shocked at the time and effort some people put into it:

Steve’s cousin from Colorado went to the family church that Steve’s Swedish ancestors built, crawled over fences and got rocks from the foundation.

John Ferrell, the man to whom I sold Mary Mac’s, brought a rock that had been part of his home in North Carolina.

Everyone arrived on a Thursday. We welcomed everyone over dinner and set the intention to create the labyrinth together. Afterwards I gave everyone candles—one of my favorite parts of my Catholic upbringing—and we walked across the bridge Steve had built to a clearing with piles of rocks all around.

When we all came to the center, the women who facilitated led us in a blessing of the land and for the work we were about to do. The center of a labyrinth is the most sacred space—when you’re there, it’s said that you’re in conversation with the divine energy. I told everyone they were welcome to leave their candles or take them back to their rooms.

The next morning, we broke up into five groups to make the four quadrants and rosette in the middle, much like the one at Chartres Cathedral in France. By lunchtime we’d laid out most of the rocks and spent the next few days finessing—changing a rock here and there and sharing the stories behind our rocks.

We set up an encampment by the trees near the lake—a cloth for shade and table with refreshments. When we started to share stories on Friday afternoon, a swarm of bees appeared and we had to get up and move. They kept following us until we went to the center of the rosette, then they left us alone.

That’s where we shared our stories. And there were a lot of them, but it was important to listen as everyone shared their spirit. Once they shared, they could place their rock wherever they wanted.

After lunch on Saturday, Connie and my sister Barbara asked to see more of the land where we planned to build the Serenbe community. Steve and our land planner, Phil Tabb, took them on a hike. When they came back, Barbara said, “Can I see the map?” She pointed to a lot and said, “I want this one.” And that started the sale of houses at Serenbe.

The candles that we’d left at the labyrinth that first night were still burning. They weren’t seven-day candles, but every time we’d go up, they’d be flickering with flame. Before everyone left on Sunday, we gathered at the labyrinth again, sang and I asked several of the women to read either a book of poetry or the Bible—whatever page wanted to be read. Again we blessed the space, returned to the house to have lunch—because meals are important to Nygrens—and everyone went on their way.

I went back up by myself that night and was amazed to see the candles still burning. Also that night, the cows decided to break out of the pasture and congregate in the center of the labyrinth. And not one of the candles went out.

The next night I went up and the last candle had extinguished on its own. The cows got out not once but twice and went to the labyrinth, leaving every rock in place. I guess they wanted to bless it in their own private ceremony.

I still think of it as one of Serenbe’s most magical weekends.

People still bring rocks to our labyrinth. A minister at a local church brought some from the Berlin wall. I bring rocks back from trips and take them up there. And Serenbe Playhouse just did their first spring play in the center of it. It was Man of La Mancha and the tagline was, “sometimes to find your heart, you have to lose your mind.”

« CHOCOLATE FONDUE (WITH JUST A HINT OF FIRE)
Recipes for Success: Why I Love Lee Bailey’s Cookbooks »

When people ask me what I do, I tell them I’m the co-founder of the Serenbe community and the Inn at Serenbe. But, the truest END_OF_DOCUMENT_TOKEN_TO_BE_REPLACED