Mentors and Memories: Me, Father Ford and this month’s issue of Atlanta Homes & Lifestyles

When people write stories about me, they inevitably ask for a photo of my mother and I cooking together. And though we spent my childhood in the kitchen, no one ever stopped stirring long enough to take a picture. 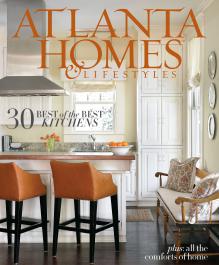 But thanks to this month’s issue of Atlanta Homes & Lifestyles, I can now say I have photos of me with the second most important food mentor in my life: Father Austin Ford.

A well-known Episcopalian minister and civil rights activist, Father Ford started Emmaus House, a community center in the Peoplestown neighborhood of Atlanta. I volunteered to run his summer program for underprivileged children and we started a funky friendship that’s lasted 28 years. 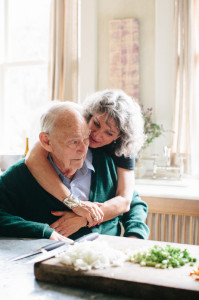 Father Ford an utterly fascinating human being. He’s a biblical scholar. A classical scholar. He has a vast knowledge of literature, poetry and history. He’s the only person I know with starched linen sheets. He hosts an annual Christmas Eve dinner after which we retire to the living room, have hot chocolate, hold hands, sing Christmas carols and are not allowed to leave until the stroke of midnight. And he heats his house with coal.

I have learned so much about food, French service and the correct way to eat with a fork and spoon from Father Ford. He makes the best sautéed red cabbage, scrambled eggs and gumbo I’ve ever had. So for the article, we cooked his gumbo for a dinner party with Steve and the girls.

When I met Father Ford, I was 26 and he was 56. Today there’s a little less tread on our tires, but he still knows his way around the kitchen. His gumbo is so much like our friendship: It takes a long time to make, is full of deep, rich flavors, nourishes the soul and sticks with you long after you’re done eating. 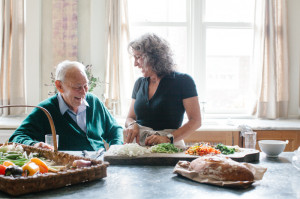 Cook vegetable oil and all-purpose flour together in a heavy cast-iron skillet. Transfer to a 2-gallon pot and add everything but the seafood. Simmer for one hour then add the seafood. Serve over rice.

When people ask me what I do, I tell them I’m the co-founder of the Serenbe community and the Inn at Serenbe. But, the truest END_OF_DOCUMENT_TOKEN_TO_BE_REPLACED