My Southern Version of a Pimm’s Cup 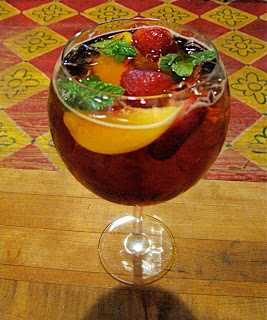 I have always loved Pimm’s which is a British liquer made with gin and fruit extract  created in 1859 by a London bar owner. It is still a secret recipe and the #1 British summer cocktail. I can not remember when I first tasted Pimm’s but in just the last year, I kinda of rediscovered its unique and refreshing taste and started making an evening cocktail for myself and whoever else might want to join me. Evening cocktails have not been a part of my evening ritual but maybe turning fifty this year opened a new door for me.

Or perhaps it is the part of my soul that feels a great affinity with England and its lovely customs and amazing lands.As much as I love France and Italy, the countryside of England is still my favorite landscape. I use to journey to England twice a year starting in 1996 to visit a dear woman I had met on a trip the previous year in Ireland at Castle Crombe, her nephew’s castle. Her name was Alice Crichton and upon that meeting we became very dear friends . I like to say soul friends, as Alice was 40 years older than me but I never thought  of the age difference. And so I would go each twice a year for a week until her death in January 2000. Those trips were some of the more fascinating ones of my life but that is for another story time.

I had not been to England in several years and had no plans on the horizon to visit but as can happen so often at Serenbe, a serendipitous invitation came our way.

In May, Steve and I were invited to attend an alumni reunion of the Prince of Wales  Environment and Sustainability Programme that was to be held at Highgrove, the Prince’s country home, in June. Serenbe had just  been chosen  to be the new east coast venue for the POW Sustainability Programme and the executive director, Lindsay Hooper, asked if we would like to come to the reunion and meet Prince Charles. So guess what our answer was? “We would be delighted to!”  Wouldn’t yours????

So a trip was planned for 3 weeks hence. We were able to arrange a week off- a luxury as of late with our busy schedules. Steve and I visited the west country, Somerset, before heading to Gloustershire and Highgrove. Somerset was some of the most glorious countryside we had ever seen. Lots of great stories here too for later because I had started this to tell you about Pimm’s.

Saying “I’d like a Pimm’s” in England is like saying “I’d like a Margarita” in America. Every bar has the makings for a Pimm’s there. A true English Pimm’s is made with Schweppe’s lemonade (not made in America and not what you’d think of as lemonade) and garnished with oranges, strawberries and mint. It is so delicious.

So that taste for Pimm’s that I had rediscovered earlier this year was able to be quenched in any corner of the country I visited. Even Prince Charles had one as his drink of choice as he visited with the group members at Highgrove.

Upon returning to Serenbe, I wondered how I could put a Southern twist to a Pimm’s and offer it as a cocktail at the Farmhouse.

A version I had tried several years ago in England at another friend’s home was mixed with ginger ale. There is a southern ginger ale called Red Rock which is a spicy ginger ale that I have loved since childhood. So, I decided to mix the two and so was born the Southern Pimm’s Cup. It is garnished with mint, strawberries and peaches- a great touch added by our bartender, Arielle. It makes it that much more southern!

I hope you’ll come to the Farmhouse and try one.

« Southern Chef’s Potluck
The end of my Summer break »

When people ask me what I do, I tell them I’m the co-founder of the Serenbe community and the Inn at Serenbe. But, the truest END_OF_DOCUMENT_TOKEN_TO_BE_REPLACED