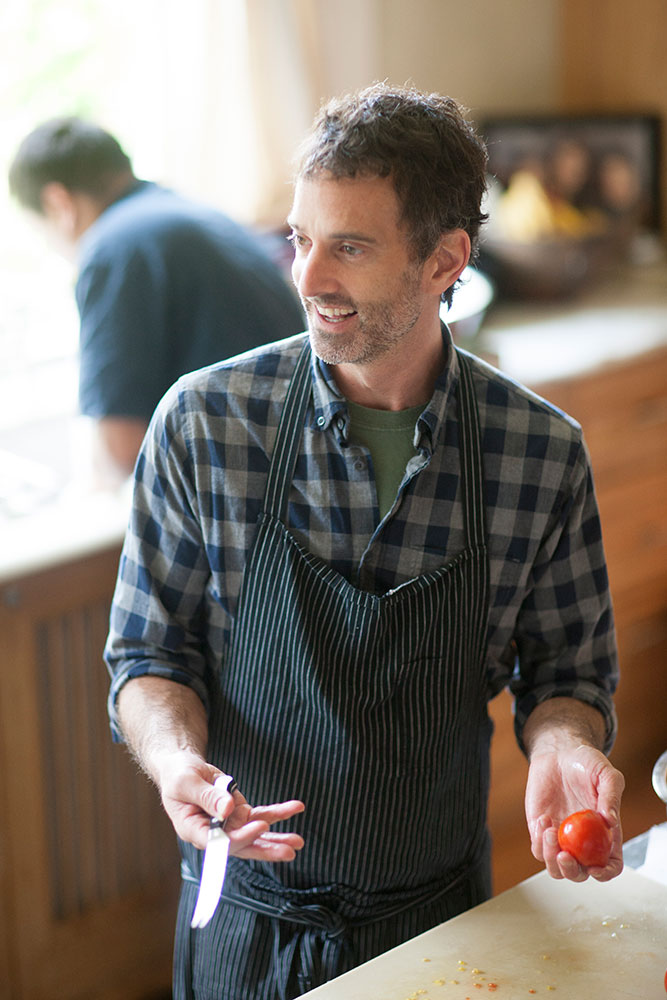 When we opened The Farmhouse back in 2005, I interviewed chef Steven Satterfield to run the kitchen. I loved his garden-fresh approach and knew he was doing great things at Watershed with chef Scott Peacock. It’s a good thing it didn’t work out: He went on to open Miller Union, which started a delicious renaissance on Atlanta’s Westside.

We changed things up and cooked dinner outside when Steven came to the Southern Chefs Series last month. I got a Tuscan Italian Grill from Bella Cucina and he grilled his skirt steak over an open flame then served it with a cilantro sauce made with garlic and toasted cumin seeds.

We made two salads on the side: an herb-buttermilk potato salad and a chopped salad with charred onion vinaigrette. In addition to the fresh ingredients, I think a vinaigrette makes any salad. What I love most about it is that it has a recipe but it doesn’t.

In a medium sized skillet, heat 1 tablespoon vegetable oil on medium-high heat. Add the diced red onion, and season with salt and pepper. Allow to sit until the onions brown and then stir several times, allowing to brown and caramelize, almost blacken. Remove from heat and transfer the browned onions to a plate to cool.

Meanwhile, combine the vinegar, mustard, garlic, salt and pepper in a blender and turn on medium speed.  Slowly add olive oil and then increase speed to incorporate.  When emulsified, add the cooled onions and taste.

When people ask me what I do, I tell them I’m the co-founder of the Serenbe community and the Inn at Serenbe. But, the truest END_OF_DOCUMENT_TOKEN_TO_BE_REPLACED