Photo by Angie Mosier / Fire In My Belly

When most people think of Kevin Gillespie, they think of tattoos, Top Chef and his wonderful Atlanta restaurant, Gunshow. But when I think of Kevin, I think of a teddy bear. He is just so cuddy and precious. For his Southern Chefs Series visit this month, he just walked in—sans apron or knives—and said, “Hey, let’s cook something.”

And did we ever. Kevin brought recipes from his cookbook, Fire In My Belly, and we cooked everything from grilled oyster mushrooms on mascarpone toast with hot giardiniera to his “not your everyday butternut squash soup,” made with cinnamon, pomegranate molasses and masala Punjabi chole curry he gets from the Dekalb Farmers Market in Decatur.

I don’t mind telling you: It was the best butternut squash soup I’ve ever had. It wasn’t creamy, it was chunky and everyone licked the pot clean. It was the first Southern Chefs Series where I didn’t have one—not one!—leftover. 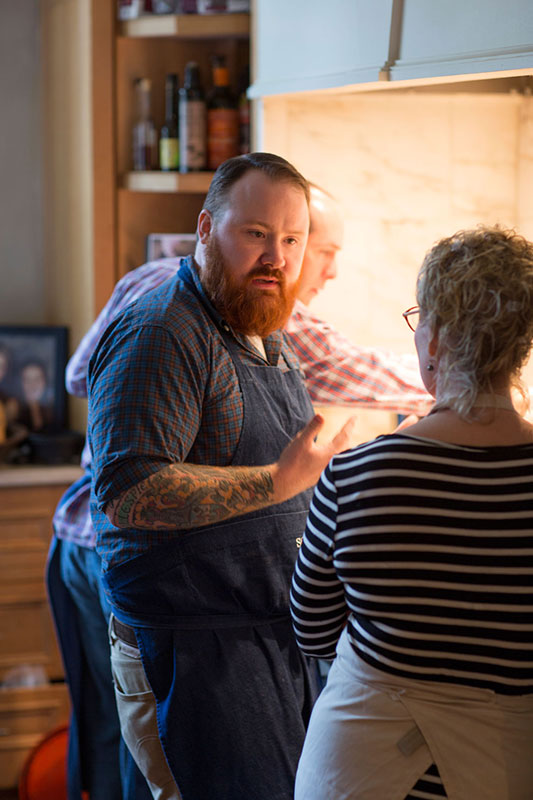 Trim the ends from the squash and cut in half lengthwise. Scrape out and discard the pulp and seeds and chop the squash into bite-size chunks. You’ll have about 12 cups. And, yes, you leave the skin on.

Melt the lard in a 4-quart Dutch oven over medium-high heat. Layer the vegetables and salt in the pot in the following order: onion first, then celery, then 1 tablespoon of the salt, then the squash, and finally the carrot. Let the mixture cook until the vegetables on the bottom start to brown, about 5 minutes. Then vigorously stir with a wooden spoon, scraping up all the browned bits and stirring them into the mixture. Let cook undisturbed for another 5 minutes, then scrape up the brown bits and stir them into the mixture. Continue cooking and scraping up the brown bits every 5 minutes until the squash is tender, about 15 minutes total. This process creates deep flavor. Don’t rush it!

Stir in the curry and cinnamon to coat the vegetables. Add 4 cups of the stock and bring the mixture to a boil. Cut the heat down so that the liquid simmers and let simmer for 20 minutes, stirring now and then. Stir in the vinegar, lemon juice, the remaining 1 tablespoon salt, and the remaining 11⁄2 cups stock; simmer for another 10 minutes.

Serve in warm bowls and drizzle with some pomegranate molasses.

“This is a chunky, stick-to-your-ribs vegetable soup that’s perfect for a cold winter day. It’s not chile pepper hot, just loaded with spices. I start by dicing butternut squash with the skin on, which adds a rustic texture to the soup and keeps the squash from completely falling apart. I use lard to sauté the squash, onion, celery and carrot so you get a little pork flavor. You could use bacon fat instead. The fat helps to caramelize the vegetables in the pan, creating a deep, savory flavor. The spices are basically warm Indian spices along with some Espelette pepper for heat and pomegranate molasses adds some acidity and sweetness. Look for it in Middle Eastern grocery stores and online. Or make it at home by juicing some pomegranates and boiling the juice until it’s syrupy, like thin honey.”  —From Fire In My Belly

« Cocktail Infidelity: Why I Cheated on the Pimm’s Cup
Pickled Shrimp with Coriander and Fennel, Bibb Lettuce, and Duke’s Mayo »

When people ask me what I do, I tell them I’m the co-founder of the Serenbe community and the Inn at Serenbe. But, the truest END_OF_DOCUMENT_TOKEN_TO_BE_REPLACED