Seeds of Change: New Hands in the Soil at Serenbe Farms

Over the years, Serenbe Moments have resulted in new neighbors, new businesses, new relationships and so much more. The most recent one resulted in our new farmers, the husband-wife team of Matt and Kali Clayton.

“We’d been following Serenbe for quite some time from our living room at our old farm in Wisconsin,” says Matt, who’s a fourth generation vegetable farmer. “Then, when we landed one road over from the community, it felt like fate — or as Marie calls it, a Serenbe Moment.”

Kali’s family lives in Georgia and, with two children under the age of two, she was eager to be closer to her mother. They leased some farmland near Serenbe but had a challenging relationship with their landlord. So Matt called Alice Rolls, the executive director of Georgia Organics, for help. And Alice called Steve.

One week before that, Ashley, Serenbe Farms’ manager, gave her notice. 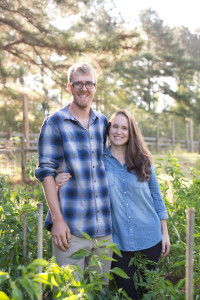 “As farmers, getting to have a fully established brand behind your produce is a once in a lifetime opportunity,” Matt says. “Farming is a business and building a client base can be one of the hardest parts. Farming can also be very isolating as you are often out on a large piece of land. So for our family, getting to plug into a community that celebrates and supports our farming goals and personal philosophies was a dream come true. We get to work on a farm, then play in the woods with our kids in a safe community — the best of both worlds.”

Matt and Kali’s farming philosophy is to work smarter, not harder — one I took to heart while turning the intern house into the farmer house and vice versa. While I cleaned out years worth of stuff, they made plans to implement water wheel transplanters and beautify the look of the farm.

So this season, in addition to the radishes and rutabaga, we’ll have a new crop of farmers in the fields. I wish Ashley well at her new farm and, with Matt and Kali’s plans for a Serenbe orchard already taking shape, I’m excited to enjoy the fruits of their labor.

When people ask me what I do, I tell them I’m the co-founder of the Serenbe community and the Inn at Serenbe. But, the truest END_OF_DOCUMENT_TOKEN_TO_BE_REPLACED