Blueberries and Serenbe in Print

Access Atlanta recently published a story, “In season – blueberries,”  about this luscious berry and featured two of my recipes for using this glorious fruit.
Though our local growers may have sold out their crop for the season of pick-your-own blueberries, you can still find them in the grocery stores.  Berries – all varieties – seem like the ultimate summer fruit.
As you know, the weekly menu at my restaurant, The Farmhouse features local and fresh produce grown in our garden at The Farmhouse, the Serenbe Farms’ fields, or from other local farms.  When summer berries are at their peak, we feature them in sweet and savory dishes.  I like the versatility of berries.
My berry cobbler recipe in the Access Atlanta story (and below) can be modified to use any berry; I’ve used them all with success and encourage you to do the same.
The Farmhouse Blueberry Cobbler
1 stick (1/2 cup) unsalted butter
1 cup granulated sugar
1 cup all-purpose flour
1 1/2 teaspoons baking powder
1/2 teaspoon salt
1 cup milk
1 pint (2 cups) fresh blueberries
Preheat oven to 350 degrees.
Put butter into a 9-by-13-inch baking dish and place in oven while oven is preheating. Remove when butter has melted; this may take up to 10 minutes.
In a medium bowl, whisk together sugar, flour, baking powder and salt. Whisk in milk until batter is smooth. Pour into melted butter in baking dish. Scatter fruit across the top. Bake cobbler 30 minutes or until cobbler is cooked through and top begins to brown. Serve hot or warm with ice cream.
Serves: 8 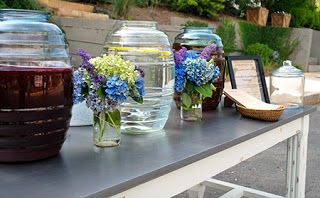 The Farmhouse Blueberry Rum Cocktail
For each serving, puree 1/4 cup fresh blueberries with a tablespoon of brown sugar and some fresh lemon juice. The puree can be strained before it’s mixed with a jigger or two of rum and topped off with a half cup of ginger ale and served on the rocks in a tall glass.  Please enjoy this refreshing libation responsibly.

Written by Marie Nygren, Posted in Serenbe Farms, The Farmhouse

If you’ve been to the website for my farm-to-table restaurant in Serenbe, or better yet, dined with us, you know we create a weekly menu for our guests at The Farmhouse.  We’re open for dinner Thursdays through Saturdays.  Menu development for that week’s offerings takes place on the Friday prior.  Before the team begins cooking for dinner, we take a walk in the restaurant’s garden to determine what produce will be at its peak, and we consult the Serenbe Farms’ list to see what is coming off the farm in the coming week.  Serenbe’s fresh, organic produce inspires the menu. 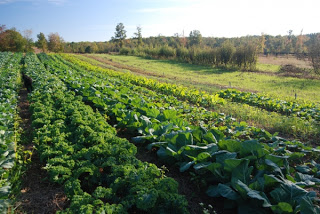 We then sit down, pen and paper in hand, and discuss what we want to do with the produce we’ll feature.  On alternating weeks, we offer fish and beef or pork and chicken.  We seldom consult cookbooks, instead relying on inspiration, tried-and-true preparations, and intuition.  In under an hour, we have a completed menu.  Due to our location in the “country,” unlike restaurants in the city that might receive daily deliveries, we are locked in to our menu, with not much room to wander from it, since orders must be placed early in the week.

On the following Thursday afternoon, we prepare that weekend’s menu for our servers  before the doors open at 6:00 p.m.  On Thursday afternoon, look for photos of that week’s meal on our Facebook page.
This week, tomatoes figure prominently because right now they are spectacular, always healthy, and terrifically versatile.  For all of these reasons, we gave tomatoes top billing for the “Starters” course at The Farmhouse, and they can be enjoyed in our featured salad, gazpacho, or tomato plate.  This week’s menu, like each week’s, features local and regional specialties. 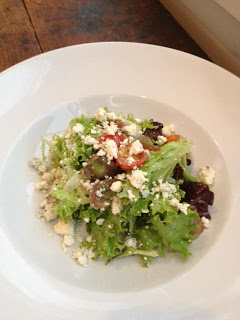 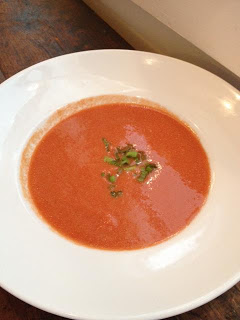 Farmhouse Garden Apple Turnovers with Honey and Vanilla Ice Cream – or – Chocolate Pecan Bourbon Pie
Join us at The Farmhousefor dinner Thursdays through Saturdays between 6:00 p.m. and 9:00 p.m. or for a Southern fried chicken lunch Saturdays and Sundays, 11:30 a.m. to 3:00 p.m. Visit us online or call 770 463 2622 to make a reservation.

The Serenbe Southern Chefs Series welcomed back Anne Quatrano, the powerhouse behind such Atlanta institutions as Bacchanalia, Abattoir, Floataway Café, and StarProvisions.
Anne brought her expertise to my kitchen on July 8 and 9 and delighted her students with a menu of tantalizing dishes for Sunday evening’s class: roasted, marinated beets with goat cheese (see recipe below); egg yolk and ricotta ravioli with summer squash and zucchini (see photo left); pan-roasted north Georgia trout with Carolina Gold rice risotto and caponata; and peach brown butter tart.
Christopher Schmidt, executive chef of one of Anne’s restaurant’s, Floataway Café, made the preparation of that evening’s meal seem oh-so-simple.
Monday brought a new day and a twist on the series, with Anne and Tim Gaddis, the cheese monger at Star Provisions, hosting a cheese tasting in place of a cooking demonstration.  The cheese selections were many, varied, and all from artisanal cheese makers in the South.  The accompaniments, which included fresh figs, cured meats, toasted hazelnuts, sautéed fingerling potatoes, caramelized onions, and Serenbe honey, perfectly complimented the cheese selections and, with a salad tossed with Anne’s homemade Green Goddess dressing, made for a satisfying meal. 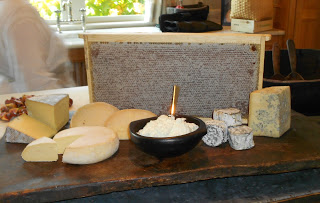 It was a privilege to open my kitchen once again to Chef Anne; she is an inspiring and inspired chef. 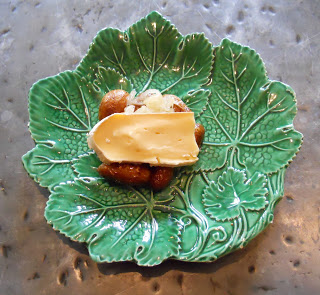 This Weekend’s Dinner Menu at The Farmhouse 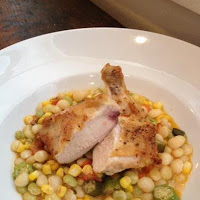 Dessert
Turtle pie – or – Boe’s blueberry cobbler
$4.95
Beverages, tax, and gratuity not included
Please visit The Farmhouse to make your reservation or call us at 770 463 2622. 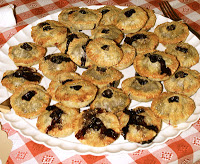 For the main course, The Farmhouse at Serenbe provided its famous fried chicken, recently touted the best fried chicken in the August 2012 issue of Martha Stewart Living, and Jim N’ Nick’s B-B-Q offered up White Oak Pastures meats and their own hot links.  The participating chefs provided Sunday supper sides along with homemade pickles, relishes, and desserts. 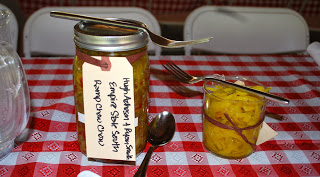 Patrons dined family style with the chefs while being entertained by local talent Christ, Lord!, Lily and the Tigers, and Under White Pines.  Once sated, the talented auctioneer Will Harris worked the crowd to raise money for Wholesome Wave Georgia. 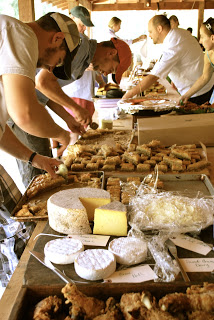 Four one-of-a-kind chefs packages were on the auction block.  Patrons bid high and bid often, raising more than $53,000 for the agency from the auction and ticket sales.  This figure represents more than $106,000 in local, fresh food purchased by Georgia nutrition assistance recipients at farmers markets as well as in excess of $106,000 in business for small, local and family farms.

Thank you Georgia residents for attending the Southern Chefs Potluck and, more importantly, for supporting the good work of Wholesome Wave Georgia.  Together, we make a difference! 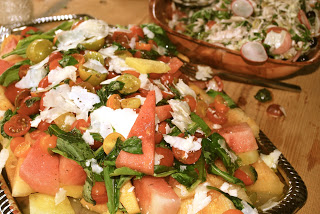 On a recent weekend, there was a mix-up on my standing bread order for the Farmhouse.  If it were for my personal order, I wouldn’t have cared.  However, when trying to feed an Inn full of guests, not having a key ingredient, such as the bread for French toast, is more than an inconvenience…it’s a big ol’ problem!

Because good bread is important, I buy mine from H&F Bread Co., owned by a Serenbe Southern Chef Series chef, Linton Hopkins.  Linton also owns and operates Restaurant Eugene and Holeman & Finch Public House; he’s a busy man.  I adore him and find him entertaining, immensely talented, and a tremendous businessman. 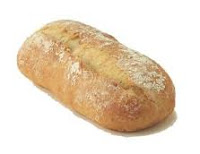 I drove to the bakery late Saturday afternoon to pick up my order, but there was no bread for me.  Hence began the calling to find out where my order was and if I’d be able to get it in time.
If you’re a top-rated chef in Atlanta on a Saturday evening, you’re probably not the person baking bread and filling orders.  Instead, you’re in the kitchen of one of your restaurants, overseeing the start of a busy night.  Imagine my surprise when none other than Linton himself called me back to find out when I absolutely had to have my order (by Sunday morning) and assured me I’d have my bread.
At 7:40 a.m. on Sunday, while prepping in the Farmhouse kitchen, I heard, “Bread delivery, bread delivery.”  Who should I find outside the door but Linton himself delivering my order.  I was awestruck.  He has a large staff and could have delegated this task to countless others.  He didn’t though and made it his priority to get up early on Sunday and drive to Serenbe to ensure my guests would have French toast.  I was already a big fan of Linton’s before this but am a confirmed fan for life now.
The moral of the story is good customer service begets happy customers, and happy customers are the best kind to have.

Here’s to Linton and H&F Bread Co. breads, which are available by the loaf on Saturdays at the Blue Eyed Daisy.
Tune in this Friday, August 3, to Better Mornings Atlanta during the 9:00 a.m. hour on CBS.  Chef Linton and I will be doing a segment about this Sunday’s Southern Chefs Potluck at Serenbe, benefiting Wholesome Wave Georgia.  It’s not too late to purchase tickets to this limited seating event.  And, what an event it is sure to be!  Purchase your ticket today for the Southern Chefs Potluck.

When people ask me what I do, I tell them I’m the co-founder of the Serenbe community and the Inn at Serenbe. But, the truest END_OF_DOCUMENT_TOKEN_TO_BE_REPLACED