Shell Shocked: Two Parties, One Day and Shrimp for 33

Years from now, when I look back at the pictures from Kara’s baby shower, I’ll remember the gifts, the 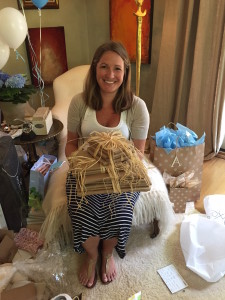 décor and how beautiful Kara looked, pregnant with her first child. I’ll also remember it as the time I scheduled two parties in the same day and forgot until I looked at the calendar.

I had 25 coming for the shower luncheon and 8 neighbors coming for an al fresco dinner. When I realized what happened, I thought, okay, I’m going to serve the same thing at lunch and dinner. That was the plan, but the plan morphed as the day went on.

For the shower, Garnie, Quinn and I agreed to host together, but guess who was nominated to cook?

I decided to make my version of a Pierre Franey shrimp salad recipe I’ve loved for years. Shrimp is one of a few fish dishes that can be served at room temperature, which makes it infinitely easier to prep. I paired it with celery, onion, shaved fennel, cucumbers, caper vinaigrette and feta cheese. Shrimp and feta is the exception to the rule of never pairing seafood and cheese. Something about it just works.

I also did a green salad with buttermilk dill dressing and pasta, because Kara loves her noodles. I tried the pasta with lemon and parsley, but something didn’t work right the first time. So I kept adding oils and vinegars until it did.

It all came off beautifully and when it was over, I looked around and thought, instead of repeating lunch, why don’t I just combine everything for dinner instead?

I’d quadrupled the green soup I made for the Farmers Market demo and froze a few batches, so I defrosted that and used it as the first course. 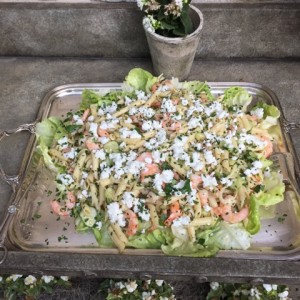 For dinner, I combined penne pasta with shrimp, added fennel, celery, Kirby cucumber, feta and covered it with vinaigrette. I even used the butter lettuces from the green salad at lunch as the base of the shrimp pasta salad. The buttermilk dill vinaigrette I did for the lunch salad wouldn’t have worked with the dinner pasta, so I combined white balsamic vinegar with Champagne vinegar, grapeseed oil and olive oil for the dressing. Again, it wasn’t quite right, so I added lemon juice and capers until it had some life to it.

What was three separate buffet dishes at lunch became one dinner at night. Hosting 33 people over the course of a day is enough to make anyone a little bonkers, but with a little advance planning — and

a lot of prep work the day before — it can work out beautifully.

When people ask me what I do, I tell them I’m the co-founder of the Serenbe community and the Inn at Serenbe. But, the truest END_OF_DOCUMENT_TOKEN_TO_BE_REPLACED