The 2nd annual Atlanta Food & Wine Festival was held May 10-13, 2012 in Midtown, and I was fortunate to be asked to be a presenter.
On Friday of the festival, I participated in a Cast Iron Cooking presentation.  During the class, participants learned the tricks behind cast iron cooking.  My portion of the interactive session included savory dishes as well as a lesson in the seasoning, care, and preservation of cast iron cookware.
There were 40 to 50 participants at my demonstration.  I prepared three types of greens, three different ways:  kale with garlic and olive oil, collards with lemon onion butter sauce, and tatsoi with applewood bacon fat and vinegar. 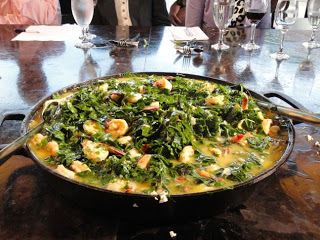 The demonstration highlighted the versatility of cast iron cooking as well as the beauty of using the heat of cast iron for a quick and delicious sauté of greens.
Maybe you have an heirloom cast iron skillet or dutch oven or perhaps you’re coveting one at your favorite cookware shop.  Either way, I encourage you to give cast iron cooking a try.  I’m sure you will be pleased with the results.  For many, this cooking method will bring back memories of relatives who relied on cast iron to prepare favorite family recipes.  It’s your turn to create new memories for your relatives. 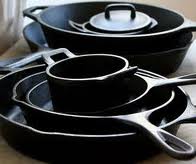 Here’s to the versatility of cast iron cooking.  Give it a try!

An Interesting Thing Happened on My Way to Work…

Something curious happens when one either moves to Serenbe or opens a business in the community (or both)…a number of people own or work at more than one enterprise here or leave rather traditional occupations for the greener pastures of Serenbe, quite literally.  The following examples are the ones I can think of at the moment.  If I’ve missed anyone, please excuse me. 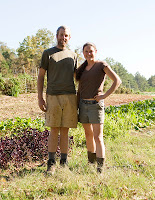 Did you know our resident farmers, Paige Witherington and Justin Dansby, are Clemson University graduates with degrees in Biosystems Engineering (Paige) and Computer Science and Forestry (Justin)?  While they had promising futures in those industries, both chose to become farmers, and we are glad they did!

Similarly, Tammi Cody of Fern’s Market is an attorney by profession.  I’m guessing shopkeeping is much more enjoyable than being and attorney, and I appreciate Tammi’s change of career.

Garnie Nygren, not one to be satisfied with a nearly 24/7 position as Director of Operations for Serenbe, also owns the real estate office and spa here and recently opened Resource with fellow resident Monica Olsen.  Sharing retail space with Resource is Honeycomb Consignment owned by resident and Serenbe realtor Raina Newell.
Karen Reed, Garnie and Raina’s colleague in the real estate office, also owns Twig with her husband, Tom, who is the mayor of Chattahoochee Hills.  Their Twig business retails another of the couple’s ventures, Aspen Bay Candles. 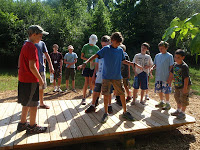 Then, there is Kara Nygren who is a teacher at The Children’s House during the school year and the Camp Serenbe director over the summer months.  Keith Robinson, event designer and owner of Gloriosa, the exclusive special event designer for the Inn at Serenbe, also owns Repurpose.
Imagine if I tried to depict the interconnectedness of Serenbe entrepreneurs using Venn diagrams?  The resulting intersections would look like a Spirograph design.

There is always room for more businesses at Serenbe. Put on your entrepreneurial thinking cap and join our business community.  You likely will get less sleep than you’re getting now, but you’ll join an energetic group of business owners. 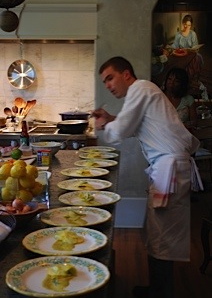 Fresh from being named Best Chef Southeast by the James Beard Foundation, Hugh Acheson of Five and Ten, The National, and Empire State South and author of the James Beard Foundation award-winning cookbook, A New Turn in the South: Southern Flavors Reinvented for Your Kitchen, filled my kitchen on May 20 and 21 with energy and his self-deprecating humor during the 3rd installment of the 2012 Southern Chef Series. 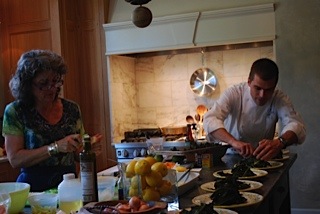 Acheson, a perennial favorite of the series, led his 10 students in the preparation of to-die-for bacon-wrapped, fennel-stuffed rainbow trout with a hot pepper vinaigrette; crisp kale and baby zucchini salad with garlic and anchovy dressing; a refreshing corn, tomato, and basil salad with a shallot, thyme vinaigrette; and sautéed strawberries with black pepper and vanilla bean ice cream. 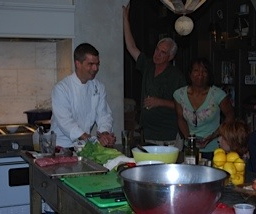 It was exciting having had both Hugh and Linton Hopkins in the chef series again this year since they recently shared the coveted Best Chef Southeast award.

Please join me in congratulating the Blue Eyed Daisy, winner of the Food Network’s Cupcake Wars! While you’re at it, stop by the Daisy and pick up their scrumptious cupcakes and other delectable treats.

Hugh Acheson’s Crisp Kale and Baby Zucchini Salad
with Garlic and Anchovy Dressing
2 small zucchinis (5 inches around) shaved very thinly
1 1/2 tablespoon freshly squeezed lemon juice
1/2 teaspoon kosher salt plus a small pinch
1/3 cup olive oil
6 cups kale leaves
1 clove garlic, peeled and minced
1/2 teaspoon Dijon mustard
1/2 teaspoon anchovy paste
1 tablespoon red wine vinegar
1/4 cup shaved Parmesan
Preheat oven to 425 degrees F.
Place the shaved zucchini in a bowl or platter and pour 1 tablespoon of the lemon juice over it. Season with 1/4 teaspoon of the salt and then douse with 1 tablespoon of olive oil. Use an olive oil you would be proud of, not the cheapest you can find. Let the zucchini sit at room temperature as you progress through the rest of the recipe.
In a large bowl toss the kale leaves with one tablespoon of the olive oil. Season with 1/4 teaspoon of the salt and toss well. Lay out on a baking sheet pan and bake in the oven for 4 to 5 minutes.
The kale should crisp well and have a nice amount of color to it but not be shriveled up greenery. We are trying to get to a texture of crunchy while retaining the beauty of green.
Remove the kale from the oven and set aside.
In a small mortar and pestle, pound the garlic into a paste with the mustard, anchovy paste, and the pinch of salt. Slowly add the olive oil to emulsify and then thin with the remaining lemon juice and the vinegar. Taste for loveliness.
Spread some of the dressing down on a platter and then arrange the zucchini on the dressing. Then pile up the kale leaves over that and dot with Parmesan shavings. Eat. It’s good for you. 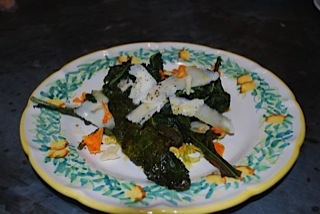 By now you’ve probably heard of the slow food movement and its goals of sustainable foods and promotion of local businesses, with an eye on lobbying for pesticide-free farming as well as other valuable objectives.  This movement is especially relevant at Serenbe where acres of fresh-from-the-ground and just-off-the-vine organic produce are available from May until late October.

With the Farmers Market in Serenbe in full swing and the recent opening of Fern’s Market, your ability to purchase all the ingredients for your meals is available without leaving the community. It doesn’t getting any slower, or better, than that.

The beauty of having Serenbe Farms in the community is the opportunity for residents and visitors to enjoy produce picked at its peak when it has been sun ripened.  The colors, taste, and sometimes even the texture are enhanced when allowed to grow and ripen to maturity.

Now is the time to be adventurous and try types of produce you may not have experienced before.  If you’re at the Farmers Market and not sure what something is or how to prepare it, Paige, from Serenbe Farms, and her crew are happy to give suggestions.  You can also find recipes here on my blog and on the Serenbe Farms’ blog at www.serenbefarms.wordpress.com. 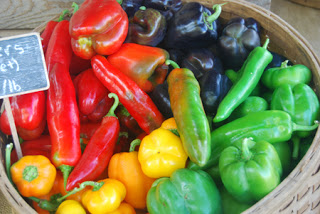 This is also the time to take advantage of seasonal produce and prepare it for consumption later by canning, freezing, or drying it.

Here’s to a bountiful garden harvest.

I was asked recently what food item is a quintessentially spring-season food to me.  My answer – sorrel.  Are you asking yourself, “What is sorrel and what do I do with it?”  Sorrel is a slender plant, resembling spinach in appearance but with a citrus taste.  Young leaves taste different than their more acidic older counterparts.  I use sorrel as a lettuce, in the preparation of my favorite soup – sorrel soup – and in sauces.

The color and flavor evoke an image of spring in my mind.  I adore it.  Unfortunately, I’m not the only one; sorrel is quite popular with moths and butterflies, rabbits, deer and probably countless other creatures who I compete with for the most tender leaves.
Thankfully, Serenbe’s talented resident farmer, Paige, has perfected growing sorrel at Serenbe Farms, so I’m assured a supply of the brilliantly green leaves for Farmhouse patrons as well as for my family’s pleasure.  You, too, can pick it up at the Serenbe Farmers’ Market.

I hope you are enjoying the foods that remind you of spring.  It’s such a great time of year.
One of my favorite ways to experience sorrel is sorrel soup.  I’m sharing my recipe.  Please enjoy! 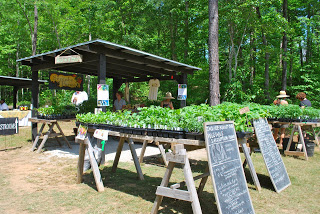 Sorrel Soup
3 tablespoons unsalted butter
1 pound onions, coarsely chopped
1 small garlic clove, minced
6 cups chicken stock
½ pound potatoes, peeled and coarsely chopped
¾ pound sorrel, trimmed and torn in large pieces
salt and freshly ground pepper, to taste
sour cream
Heat butter in a deep pot and sauté onions until wilted and turning golden, about 5 minutes.  Add garlic and cook for another minute.  Add stock and heat, then add potatoes. Simmer until potatoes are done, about 10 minutes.  Stir in sorrel and heat thoroughly.
Transfer to a food processor and puree.  Return to the pot and heat for another few minutes, correcting seasoning with salt and pepper if necessary.
Serve with a dollop of sour cream on top of each serving.  This recipe doubles and even triples quite nicely and easily. 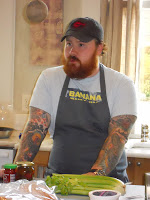 On March 25 and 26, the second installment in the Southern Chef Series took place, featuring Season 6 Top Chef finalist Kevin Gillespie of Woodfire Grill.  Kevin instructed 10 eager home chefs in my kitchen.  By lunch on the 26th, his protégés had refined their dicing skills, perfected the slow sauté to bring out the rich flavors of root vegetables, marinated and grilled flank steak to perfection, and mastered the once intimidating Crepes Suzette with an oh-so-dreamy citrus butter sauce. 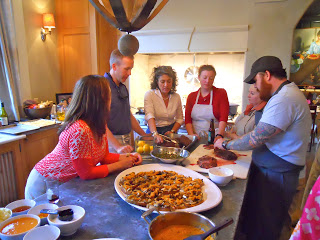 New and returning “students” enjoyed Kevin’s easygoing manner and hands-on approach.  Within minutes of starting the class, Kevin had the participants at the cutting boards. By lunch on day 2, they left class empowered to recreate this talented chef’s menu, utilizing new or improved skills. 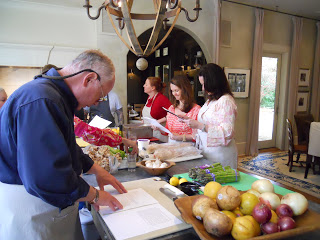 Bring a large pot of water to a boil.  Pour the oil into a loaf pan or one quart casserole dish.  Add the garlic and 2 tablespoons of small leaves from the basil to the oil.  Wrap the remaining basil in a damp paper towel, cover, and refrigerate until time for serving.  Using a fine microplane grater, zest 1/2 of the lemon directly into the oil.  Using a vegetable peeler, strip two large pieces of the peel into the oil; make sure you have a little peel left on the lemon.  Drop the asparagus in the boiling water for 1 minute.  Using tongs, remove the asparagus from the water, tap the tongs on the side of the pot, shaking off any excess water, and lay the asparagus into the dish with the oil.   The asparagus should be completely submerged; add a little more oil if needed.  Wrap the pan with plastic wrap and refrigerate until thoroughly chilled, about 4 hours. 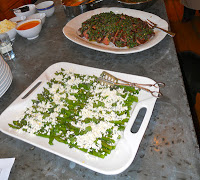 Remove the asparagus from the oil and place in a single layer on a serving platter.  Sprinkle with salt and a tiny squeeze of lemon juice.  Grate or crumble the feta over the asparagus and garnish with a few basil leaves and a grate of lemon zest.

When people ask me what I do, I tell them I’m the co-founder of the Serenbe community and the Inn at Serenbe. But, the truest END_OF_DOCUMENT_TOKEN_TO_BE_REPLACED