Chances and Choices: Dinner and Breakfast with Alice Waters 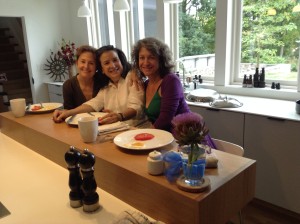 Last week I wrote about packing up some Many Fold Farm cheese and jetting off to see the legendary Alice Waters. Alice lives in Berkeley, California. I live in Georgia’s Chattahoochee Hills Country. So how did we wind up in the same house in Rhinebeck, New York? Well …

My husband, Steve, is on the board of the Ray C. Anderson Foundation with a man named Bob Fox. I met Bob’s wife, Gloria, at a board meeting earlier this year and it was one of those things where we just looked at each other and thought, oh, we’re kindred spirits, aren’t we?

A few months later, I visited with Gloria at her home in Rhinebeck and shortly afterwards she called to say she’d been asked to host a fundraiser at her home to re-create the victory garden at the home of Franklin D. Roosevelt in Hyde Park, New York. And who’s on the board of that effort? Alice Waters.

I immediately checked my calendar and saw I had two events on Saturday and one event the Sunday of the benefit in New York. I lamented the conflict to my dear friend, Austin Ford, who said, “Tell me again why you can’t go, Marie?” And that helped me realize I had more choices than I thought. I woke up at 5:30 a.m. one morning thinking about it, had a ticket by 7 a.m. and called Gloria to say, “I’m coming!” That weekend I hopped on a plane, then hopped on a train and wound up eating duck breast cooked in a cast-iron skillet over an open fire with Alice Waters.

I’d met Alice years ago at an event in Atlanta, but this was the first time I’d had an opportunity to have an intimate evening with her. She was lovely and incredibly gracious with everyone, including the young chefs who’d done extensive research to find her favorite duck breast recipe.

After the event, Gloria, Bob, Alice and I sat around and talked until we were hungry again and had leftover duck with broccoli rabe, sautéed mushrooms and a cheese-and-chocolate course with the Many Fold Farms cheese. Alice had a board meeting the next morning, so we got up early, went on a hike and had Alice’s favorite breakfast when we returned: a piece of toast, egg over easy and a sliced tomato

Since then, the victory garden effort has been on my mind—I’ll write more about it next week—especially as I’ve thumbed through Alice’s newest cookbook, The Art of Simple Food II. This recipe for Yellow Finn Potato and Black Trumpet Gratin, a rich, earthy mix of potatoes and mushrooms, pairs perfectly with the season.

Yellow Finn potatoes are rich in flavor and have the perfect texture for a gratin. They become soft and luscious without breaking down into a puree. For added color, alternate with rows of red-fleshed potato such as Cranberry Red. Black trumpet mushrooms (also called black chanterelles or horn-of-plenty mushrooms) can harbor sand. Be sure to rinse them well before cooking.

Gently tear in half lengthwise:

Swish them in a bowl of cool water to clean; drain well. Heat a heavy-bottomed pan over medium heat. Measure in:

When the butter has melted, add the mushrooms and cook, stirring now and then, until all the water has evaporated and the mushrooms just start to sizzle. Remove from the heat to cool. Taste for salt and add more as needed. Remove the thyme sprig.

Hold in cool water until ready to use to keep them from browning.

Rub a 6-inch-by-8-inch baking dish with:

Allow to dry a little and rub the dish with

Pour into a small pot and warm:

Once all the ingredients are prepared, preheat the oven to 375 F. Slice the potatoes ¼-inch thick. Use a mandoline slicer or a sharp knife to make the slices as consistent as possible. Using one-third of the sliced potatoes, make a layer of potato slices on the bottom of the baking dish. Season with:

For the last layer of potatoes, carefully arrange rows of potato slices overlapped like shingles and completely covering the surface.

Put the gratin in the oven and bake until tender and golden, about 1 hour. After it has been cooking for 35 minutes, press the top layer of potatoes under the cream with a spatula. Press again after another 15 minutes. This keeps them from drying out.

When done, the potatoes should be very soft, the top golden and the liquid mostly gone. If the potatoes begin to brown too much before being cooked through, loosely cover the top with a bit of foil.

“Beauty does not come with a price tag”.

One of my favorite things is what I call Hi/Lo.

So often, people think that to get great style it has to be expensive. I love to tell people about my finds: a great deal on dining room chairs to go with my repurposed dining table, or that wonderful inexpensive floor lamp to add the finishing touches to a living area.
Some of the best places to shop for items that I just love are Target and Ikea. Did you know that Target on- line features eco friendly home decor at affordable prices? Or that Ikea has wonderful dining chairs to go with your dining table?

Recently we added some furniture to one of our green homes in Serenbe and came up with a wonderful mix of hi/lo. Imagine a designer dining table with $69 dining chairs from Ikea. Or a beautiful over sized wall clock for $100 from Target for a contemporary feel.
Look around you and there are so many lovely things you can add to your home to bring beauty into your life. Style doesn’t have to be expensive, it just has to be a reflection of who you are and what you wish to share with others.

d in the Inn at Serenbe, serves beloved recipes made with farm-fresh organic ingredients grown just steps away on the Serenbe Farms.  My husband Steve  and I founded Serenbe and operated it with the family as a bed-and-breakfast before the community developed,  and recently I am excited to have returned to my kitchen in the historic home as proprietress to guide the art of southern cuisine utilizing local products.

“Whether in the restaurants at Serenbe or in our home, we enjoy watching people’s reactions as they taste locally-grown, freshly-harvested food. If you’ve never had an egg that was gathered that same morning, or a turnip or tomato that was picked yesterday, tasting it for the first time is like coming home.”

The weekly-changing, a la carte menu is rich with Southern delicacies straight from my recipe box, prepared in a style that highlights the flavor and nutrients of

farm-fresh produce.
Reservations are recommended at the Farmhouse which serves dinner Thursday-Saturday evening and a fried chicken brunch every Sunday. Come by early and enjoy a mint julep on the veranda during our two for one happy hour from 4-6:00 pm at the newly opened Farmhouse bar. 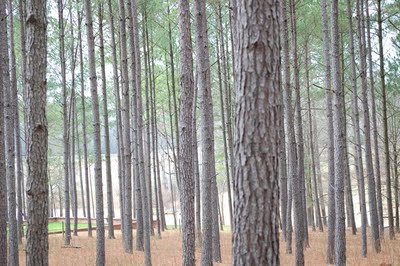 “Living authentically is all about being who you are and honoring your soul.”

Henry David Thoreau once said, “our truest life is when we are in our dreams awake.”

What holds especially true for me is the essence of what this means. Serenbe is living proof you can be in your dream awake.

“What people in other communities get from us is that it is possible. You just need the willingness and the daringness to risk doing it. You have no guarantee it will succeed, and you have to be willing to embrace that.”

“Go out and live your truest life, your own dream awake.”

When people ask me what I do, I tell them I’m the co-founder of the Serenbe community and the Inn at Serenbe. But, the truest END_OF_DOCUMENT_TOKEN_TO_BE_REPLACED